The benefits of a wetland‐rich landscape are valuable and varied. They feed lakes and rivers, trap and filter sediments and nutrients, play a role in floodwater absorption, buffer croplands and settlements from strong run-off, and replenish rivers and streams during the dry season.Together with forests on the hills the wetlands function as the 'water tower' in the catchment.

Protection of wetlands is crucial for long term water resources. Some wetlands have build up thick layers of peat soil over thousand years. Rwandas peat to power strategy foresees the exploitation of peat soil in various locations to be used as fuel for electricity generation. Peat is also used as manure to be added to improve the soil structure nutrient management of hillside agriculture. Especially the wetlands located in the higher parts in the North of Rwanda consists of pure organic material: peat. When these wetlands are drained the organic material oxidizes (burns) so they desintegrate until nothing remains.

Rwanda has counted 860 marshlands, covering a total surface of 278 536 ha, which corresponds to 10.6 per cent of the country surface (REMA 2008). Part of Rwandas wetlands has to be preserved as natural reserves to continue the provision of these important ecological services to society. The Rugezi wetland is an example of how a degraded wetland was restored and recovered its water flow capacity for the Ntaruka and Mukungwa hydropower stations. Wetlands are also called swamps or marshlands. The Rugezi wetland is the only RAMSAR site in Rwanda (list of important wetlands defined by the international convention on wetlands).

Agriculture in wetlands is not very productive. Agro Action developed a model for wetland irrigation. A typical wetland irrigation has the size of 70 hectares that is managed by a cooperative of 700 farmers. The project provides 1000 m2 per family. An irrigation cooperative is set up for management of the irrigation scheme. The farmers contribute with labour during construction phase to to acquire access user rights in the irrigation scheme. One out of five days work is considered own contribution. Agro Action  conducts feasibility studies to determine the soil, and water resources and map the social components. The farmers that participate in the project are selected by the community. Baseline studies are conducted and the irrigation scheme is designed. After approval Agro Action  builds the drainage and irrigation infrastructure including a river intake or dam. Training and accompanying the irrigation cooperative before, during and after construction is important. Training includes the production of the irrigated crops. Most farmers do not have experience with irrigation and it takes time for the cooperative to gain the operational management capabilities. AAR experience shows  that monitoring and accompanying  should continue  a minimum of 5 years after finishing the construction. Hillside erosion control measures are included to avoid sediments damaging the wetlands. Terracing helps also to increase infiltration of the water that slowly filtrates to the river and wetlands

Approximately, 92,000 hectares of wetlands in Rwanda  are used for traditional agriculture. Farmers plant sweet potato and corn on the borders of the wetlands. Farmers use the wetlands to diversify risk in the livelihood strategies. Production is secured in the humid valley bottoms when the hillsides are dry. Farmers also harvest Papyrus that is used in construction.The wetlands are rich in organic material.

Thousands of hectares of wetlands are being drained and transformed into irrigated wetlands. The main irrigated crops are rice and sugar cane, products for which Rwanda seeks self sufficiency.

A problem encountered when draining the swampy valleys is the erosion of the central drainage channel. The soil will dry out, the channel walls collapse and farmers may abandon the scheme. Experience shows that the drainage can increase erosion and there is the risk shrinking soils due to oxidization of the organic matter. When this happens carbon dioxide is released that contributes to climate change.

The irrigation (including construction of dams) also changes the river flow for up and downstream users. A dam can create waterlogging problems upstreams of the dam. The drainage of wetlands have to be planned carefully and requires special wetland irrigation management to reduce and mitigate the degradation and problems with other water users in the catchment. Large wetland irrigation schemes can influence the water balance of the entire catchment. 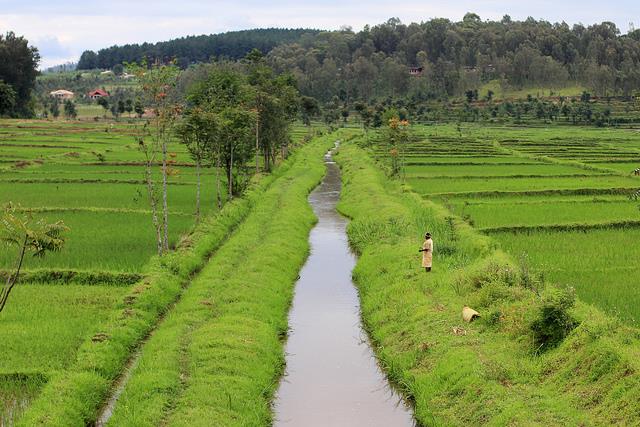 Rwanda does not have a wetlands policy and wetlands are currently being managed under the Environmental Organic Law and the Land Law. Conservation of wetlands is vital particularly in protecting and promoting wetlands normal functions. Without appropriate management measures, drainage of wetlands and irrigated agriculture has the potential to create serious ecological imbalances both at the project site and in adjacent areas. Wetlands are also threatened by encroachment by other landuses, reduced inflow from upstream areas, and contamination.

By law the wetlands have a bufferzone of 50 mts. This strip is public land and cannot be used or agriculture, or other activities. Vegetative buffers (or greenbelt) around the wetlands are natural barriers to protect the wetlands. A greenbelt is simply a strip surrounding the wetland that is maintained in a natural vegetated state or planted with bamboo or other plants.The vegetation in the greenbelt uptakes excess nutrients and pollutants in overland flow and thereby protects the wetland. The vegetation also serves to slow the velocity of overland flow which helps to prevent erosion and creates a better opportunity for the water to percolate into the soils. This helps to reduce the "flashy" nature of runoff from upland and urbanized areas. The greenbelt can also serve as a habitat connector between wildlife corridors.

Using a watershed approach appears to be the best strategy for the management of irrigated wetlands and the rehabilitation of degraded wetlands in Rwanda.

Powerpoint Introduction to wetlands in Rwanda